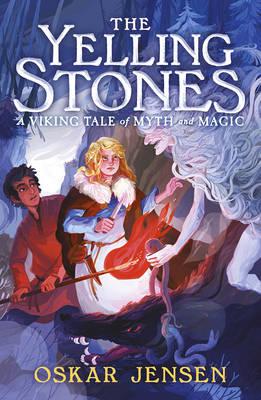 A Viking tale of myth and magic. All is not well at the Viking court of Jelling. Home to the mysterious Yelling Stones (three witches turned into stone in the middle of screaming a fierce spell), it’s always been a place of power and a haven for ‘the old ways’. But recently certain members of King Gorm’s court have been muttering about ‘modernisation’ - not that fourteen-year-old princess Astrid is concerned about that. She’s far more worried that her family seem to want her inside sewing, or planning a marriage, rather than letting her explore the forest or ride her beautiful snow-white horse, Hestur. But Astrid is about to find herself at the heart of a battle that will change her life forever. Leif, an ambitious and talented young poet, arrives at King Gorm’s court with unsettling news. Leif announces he has been sent visions from the witches of the Yelling Stones, saying a dangerous and powerful force is coming - one that will change the face of Denmark - and only Astrid and Leif can stop it. But with danger all around them, including trolls, witches and a terrifying creature called ‘The Beast’, can they tell who the real enemy is in time to stop them?