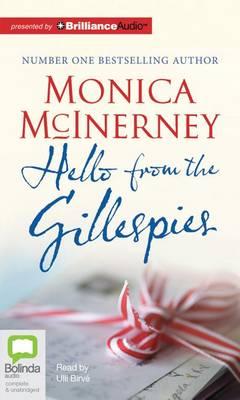 From the bestselling author of The House of Memories comes a heartfelt and hilarious novel about miscommunication and mayhem in a family like no other For the past thirty-three years, Angela Gillespie has sent to friends and family around the world an end-of-the-year letter titled Hello from the Gillespies. It’s always been cheery and full of good news. This year, Angela surprises herself-she tells the truth…. The Gillespies are far from the perfect family that Angela has made them out to be. Her husband is coping badly with retirement. Her thirty-two-year-old twins are having career meltdowns. Her third daughter, badly in debt, can’t stop crying. And her ten-year-old son spends more time talking to his imaginary friend than to real ones. Without Angela, the family would fall apart. But when a bump on the head leaves Angela with temporary amnesia, the Gillespies pull together-and pull themselves together-in wonderfully surprising ways….