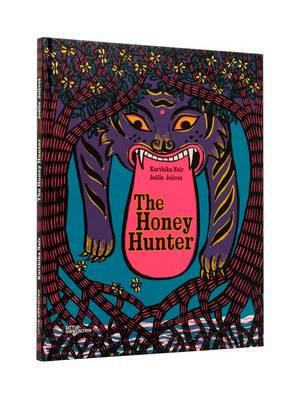 Featuring exotic images and empathetic language, this modern day Indian fairy tale teaches children to respect and appreciate nature.
The story of the honey hunter beings in Sundarban, a land of eighteen tides and six seasons, where three rivers meet in a huge mangrove forest. At first, everything is peacefulfor the thousands and thousands of honey-bees that live there not far from the Bay of Bengal. They fly from flower to flower, collecct nectar, and supply both people and animals with their sweet, liquid gold. Everyone who lives in Sundarban loves honey, but one most of all: a small, black-haired boy named Shonu.
One year, the seasons in Sundarban get mixed up and the region is plagued by powerful cyclones followed by drought and hunger. Shonu becomes so unbelievably hungry that he sneaks into the mangrove forest and breaks the golden rule: he takes honey from the hives even though it is not yet harvest time. Shonu doesn’t quite realize that what he has done could get him into deep trouble with the almighty demon tiger…
This modern day fairy tale reveals what can happen when someone interferes with nature’s rhythm. It teaches children to respect and appreciate the environment. Inspired by Muslim and Hindu myths, author Karthika Nair and illustrator Joelle Jolivet have created a compelling narrative style and visual language to tell their tale.
$37.50Add to basket ›