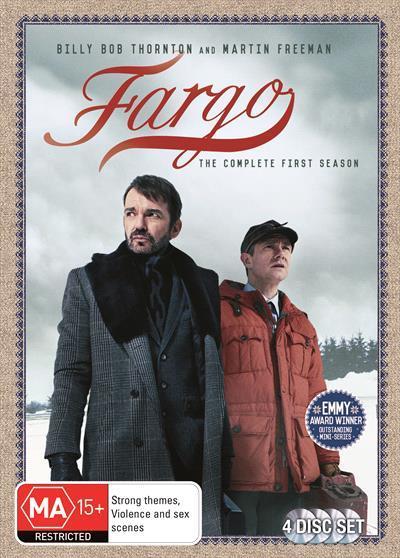 An original adaptation of the Academy Award-winning feature film, Fargo features an all-new “true crime” story and follows a new case and new characters, all entrenched in the trademark humor, murder and “Minnesota nice” that made the film an enduring classic.

Set in Bemidji, Minnesota, this drama series follows Lorne Malvo (Billy Bob Thornton), a drifter who meets and forever changes the life of an ordinary insurance salesman, Lester Nygaard (Martin Freeman).
Other key players include Colin Hanks as Duluth Police Deputy Gus Grimly, a single dad who must choose between his own personal safety and his duty as a policeman; Allison Tolman and Bob Odenkirk as a pair of Bemidji cops; Kate Walsh as a former stripper; Oliver Platt as the supermarket king of Minnesota; Glenn Howerton as an ambitious personal trainer; and Russell Harvard and Adam Goldberg as members of the Fargo crime syndicate.

Inspired by the 1996 film, this adaptation of the Coen brothers’ fan favourite does its muse proud. A wolf named Lorne Malvo has come to rural Minnesota. The sweeping strings in the opening titles let us know that good and evil will battle it out in this depressing setting. This devilish stranger – the seductively cold Billy Bob Thornton – has bigger fish to fry than downtrodden local insurance agent Lester Nygaard. But the two cross paths and the amoral light in the newcomer’s eye ignites something in the small-town loser. One Faustian deal later and Lester is on a sometimes panicky, sometimes gleeful path of no return.

Standing in the way of Lester’s total abandonment of morality and community is the diligent, long-suffering police officer, Molly Solverson. Despite being relegated to coffee and doughnut duty by everyday sexism and ‘Minnesota nice’, she knows from the get-go that something has gone seriously wrong in her town. Helping her fight the good fight is Gus Grimly, a cop from a neighbouring town who has been consigned to animal control. Grimly is not really cut out for the job and struggles to convince his superiors to forget about stray dogs and focus on the real animal threat.

Fargo delights in making the viewer root at times for the wholesome Molly, at times for the despicable Lester. If we’re so keen for community to triumph, why are we so oddly intrigued by Malvo’s indifference to the ties that bind? Fargo is beautifully realised, sometimes strange, and not afraid to stand apart from regular crime dramas.