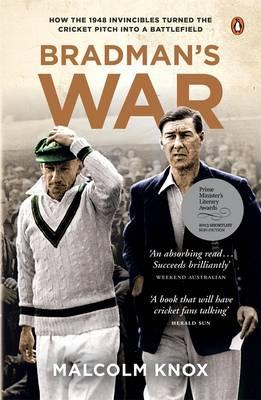 Shortlisted for the 2013 Prime Minister’s Literary Awards
The Australian and English Test cricketers who fought and survived together in WWII came home planning to resume the Ashes in a new spirit of friendship. Australia’s legendary captain had something else in mind. The 1948 ‘Invincibles’ are the only Australian team to complete a tour of England undefeated. In his compelling account, Malcolm Knox exposes the mixed feelings among the fans, commentators and players - from both teams - about the manner in which their feats were achieved. At its heart was a rift between players who had experienced the horrors of active duty, epitomised by the fiery RAAF pilot Keith Miller, and those who had not, such as the invalided Bradman.
Bradman’s War celebrates the talents of Ray Lindwall, Sid Barnes, Lindsay Hassett, Bill Johnston, Arthur Morris and, of course, their irrepressible captain, but wonders if the Don’s single-minded tactics, even against the war-ravaged veterans of the country clubs, cost Test cricket the opportunity to be played for the love of the game.
‘The last word on a seminal chapter in Australian sporting history.’  Inside Sport
‘An excellent work by an outstanding journalist.’ Courier-mail
‘Poised and evocative.’ The Age