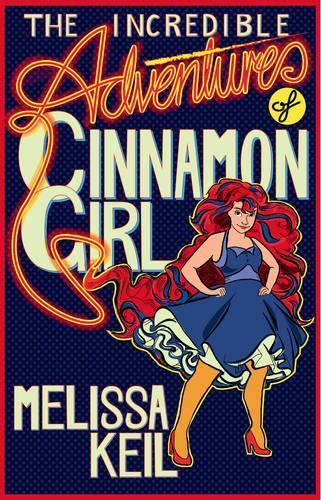 Seventeen-year-old Alba is an aspiring comic-book artist, pastry enthusiast and eternal optimist. She thinks life in her tiny town is awesome (if predictable) and she never wants it to change. Unfortunately Alba’s just finished Year 12 - so the only thing she can predict is that everything’s going to change. Even so, Alba didn’t see the end of the world coming. Apart from a questionable television psychic, no one did. And for some reason, the world seems to be taking this guy seriously.
As the tiny town is besieged by doomsday enthusiasts, Alba’s life is thrown into chaos. The childhood friend she thought was gone forever unexpectedly reappears; the boy who has been her best friend forever is determined to leave; and even her latest comic book creation, Cinnamon Girl, is out of control. It could be the very last summer of Alba’s life, but impending Armageddon might turn out to be the least of her problems. Alba is about to discover that when it comes to her heart, there may not be infinite time to get things right…Spoiler alert: the world doesn’t actually end.

Eden Valley is a beautiful, small country town that has never seen much of anything. Alba – aspiring comic-book artist and creator of Cinnamon Girl – can’t figure out why, after graduating high school, she’s the only one of her friends who isn’t desperate to get out. If change is such a good thing, why does she get this funny feeling in her tummy every time she thinks about the future?

Though, that was before some nut job predicted that the world was going to end, and that teeny-tiny, off-the-map Eden Valley would be the only place to survive the apocalypse. While the clock is running out on Alba’s life, doomsday turns out to be the least of her problems. This is a story about embracing change and understanding where fear of change comes from. None of the characters want to be vulnerable, so there’s a lot of hiding behind big personalities. It’s fun, in a goofy, nerdy kind of way.

Recommended for ages 14 and up.

Rockabilly chick and comic-book lover Alba is facing one of the most important summers of her life. School is over - what next? Then a viral YouTube video about the end of the world announces that Eden Valley is the only safe...

Sam Kinnison is a geek, and he's totally fine with that. He has his horror movies, his nerdy friends, World of Warcraft and until Princess Leia turns up in his bedroom, worry about girls he will not. Then Camilla Carter arrives...

END_OF_DOCUMENT_TOKEN_TO_BE_REPLACED

Rockabilly chick and comic-book lover Alba is facing one of the most important summers of her life. School is over - what next? Then a viral YouTube video about the end of the world announces that Eden Valley is the only safe...