Stop the Presses: How Greed, Incompetence (and the Internet) Wrecked Fairfax 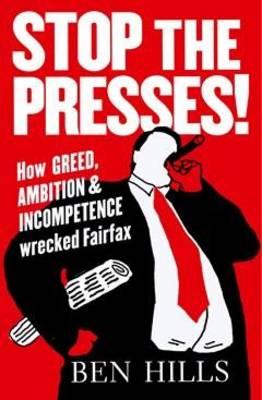 Stop the Presses: How Greed, Incompetence (and the Internet) Wrecked Fairfax

A decade ago Fairfax Media was one of the most powerful institutions in the country; staffed by gun reporters, funded by its ‘rivers of gold’, offering up high quality, fearless journalism. Since then, it has become a car wreck in slow motion. But how did it come to this? Why did one overpaid, underwhelming manager after the next fail to see the future coming - or come up with a coherent plan? Why were they fighting with each other rather than fighting to save the company? And what was happening to journalism in the meantime?

In his dramatic, no-holds barred book, Ben Hills exposes the characters who took Fairfax to the brink of destruction - the dynastic princes, the acolytes, the self-interested, the would be owners waiting in the wings. He tells the sometimes poignant, sometimes hilarious tales of what unfolded behind boardroom doors and at team bonding retreats. And he asks if the trail of greed and incompetence could have been avoided.
More than just another Fairfax book, Stop the Presses tackles vital issues around the death of independent media and the rise of the Internet age and asks what the price will ultimately be for democracy itself.

In this account of the Sydney Morning Herald and the Age, Ben Hills describes the causes and consequences of the broadsheets’ decline. Having worked for 30 years at both papers, Hills is a ‘lifer’ who is personally and professionally familiar with his material. He identifies the problems which have stricken the printing and publishing industry worldwide, further compounded by strategic responses of Fairfax executives. For example, millions were spent on a new printing plant in Tullamarine (2001), and new office headquarters in Sydney (2008) and Melbourne (2009). In April this year, the plant was closed and its presses dismantled.

It is when narrating the human consequences of mismanagement, such as Fairfax chief Greg Hywood’s 2012 restructuring towards a ‘Fairfax of the Future’, that Hills’ book is differentiated from others on the same topic. Journalism can be an idealistic profession, often at odds with the pursuit of profits. Hills writes with compassion of the individuals struggling with the end of these institutions, and for many, the more prosaic end of a career.

There are, however, alternative futures for journalism, as represented by the post-Fairfax careers of the diaspora. Some, like Hills, freelance. Others are employed by the Guardian, which is backed by a trust and subsidised by profits from its auto-trading site. Outside Australia, a promising example is the sponsorship route, where a journalist or photographer is funded to pursue a story. Glenn Greenwald disclosed news on global surveillance for the Guardian, while for the New York Times, Luke Mogelson and Joel van Houdt documented their journey to Christmas Island on an asylum-seeker boat.

Like its title, Hills’ thesis is comprehensive. With regards to the decline of Fairfax Media’s leading broadsheets, the fault isn’t in the internet, but in short-sighted stakeholders and helmsmen. To sacrifice the ephemeral asset of journalistic talent is to sacrifice institutional purpose, effectively gutting the fourth estate. The coda – and consolation – is that those news institutions that do survive the transition from print to digital media will be those whose trustees know to balance profits with purpose.

Maloti Ray is a freelance reviewer.