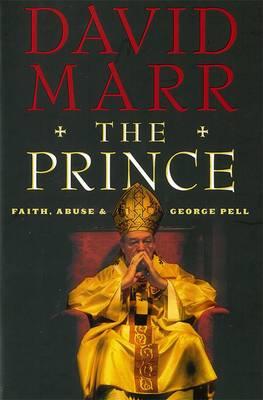 The leading Catholic in the nation and spiritual adviser to Tony Abbott, Cardinal George Pell has played a key role in the greatest challenge to face his church for centuries: the scandal of child sex abuse by priests.
In The Prince, David Marr investigates the man and his career: how did he rise through the ranks? What does he stand for? How does he wield his authority? How much has he shaped his church and Australia? How has he handled the scandal? Marr reveals a cleric at ease with power and aggressive in asserting the prerogatives of the Vatican. His account of Pell’s career focuses on his response as a man, a priest, an archbishop and prince of the church to the scandal that has engulfed the Catholic world in the last thirty years.
This is the story of a cleric slow to see what was happening around him; torn by the contest between his church and its victims; and slow to realise that the Catholic Church cannot, in the end, escape secular scrutiny. The Prince is an arresting portrait of faith, loyalty and ambition, set against a backdrop of terrible suffering and an ancient institution in turmoil.

There is, throughout this book, the satisfaction of seeing Cardinal George Pell put under the bright light of reason. The Catholic Church dresses Pell and all it’s other ‘princes’ up in gold, and hides them, literally, with clouds of sweet-smelling smoke. But then David Marr has the intelligence and the will to say, while the gold shines and the mists swirl: I just have one or two questions. Some of your priests have been raping children. I have seen the reports and the files. Some of these priests are still in the parishes, and have been raping children for twenty, thirty, forty years. When did you know? And, Your Eminence, when you found out, what did you do?

And Pell’s answers are so bad. Marr shows us what Pell has said to courts and to inquiries. Pell says, over and over: I didn’t know. I don’t remember. I am ‘mystified’. And Marr shows that, over and over, Pell was sent the letter, Pell had the files. And he did nothing. Or worse, sickeningly worse, he fought against the victims. At the centre of this book, and Pell’s wrongs, are people like Chrissie and Anthony Foster, who told Pell that both of their daughters, aged five and three, were raped by the parish priest. Pell replied, ‘I hope you can substantiate that in court.’

Pell can seem so strange partly because he is so orthodox: nothing is as important to him as the church; its priests, its rules. Marr thinks that Pell can’t be like this, can’t live so obediently, live without sex, without being damaged, gutted. That might be true. But as satisfying as it is to see Pell brought down by reason, it’s still possible that Pell is satisfied, every day, because he is so unreasonable. To be as obstinate, ‘invincibly obstinate’, as Pell, is exactly what some people will always need, and others will always admire. At least half of religion is just obstinacy, and Pell made it more like three-quarters. But anyone who thrilled, even a little, to Pell’s time as an Archbishop in Australia, should read The Prince, and see better the cruelty, the real evil, in Pell’s kind of satisfaction.

Sean O'Beirne is an Events Co-ordinator for Readings.