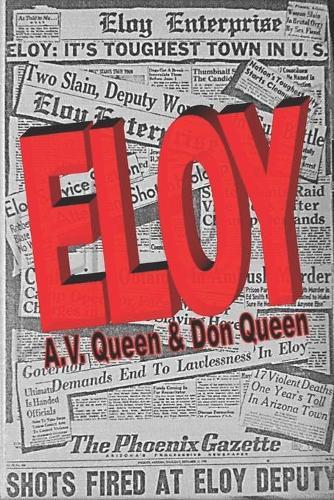 Following WWII, Eloy, a hot dusty Cotton Boom Town in South Central Arizona lived up to its Spanish translation, My God, My God, why hast thou forsaken me? The actual events of Eloy, Arizona during post WWII are well documented in this edition, with original crime photographs, original newspaper articles, notes that were kept by A.V. in his trusty notebook. Imagine living back in 1941 and to be told by a doctor at the T.B. Sanatorium in Talihina Oklahoma that your only chance for survival was to move to a dryer climate or die.With a leap of faith, in a 1939 Chevy the entire Queen family of eight, a hired driver, seventeen quilts and all of their earthly belongings that would fit in the car headed west, settling in a small, dusty Cotton Boom Town of Eloy. There A.V. began to heal himself in the dry heat.The family’s fortune changed dramatically afterA.V. helped a deputy lock up three very resisting prisoners. A few days later, Chief Deputy, Ed Tex Smith, offered him the job of night deputy. How was A.V. to know that Eloy would soon become known as The Toughest Town in U.S