The Black War: Fear, Sex and Resistance in Tasmania 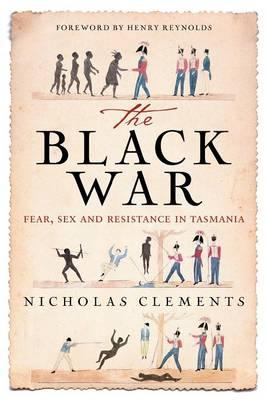 The Black War: Fear, Sex and Resistance in Tasmania

At its core, The Black War is a story about two peoples who just wanted to be free of each other…sooner or later Europeans and Aborigines were bound to clash, but it was Tasmania’s unique circumstances that turned this encounter into a ‘war of extermination’. Between 1825 and 1831 close to 200 Britons and 1000 Aborigines died violently in Tasmania’s Black War. It was by far the most intense frontier conflict in Australia’s history, yet many Australians know little about it.
The Black War takes a unique approach to this historic event, looking chiefly at the experiences and attitudes of those who took part in the conflict. By contrasting the perspectives of colonists and Aborigines, Nicholas Clements takes a deeply human look at the events that led to the shocking violence and tragedy of the war, detailing raw personal accounts that shed light on the tribes, families and individuals involved as they struggled to survive in their turbulent world.
The Black War presents a compelling and challenging view of our early contact history, the legacy of which reverberates strongly to the present day.
$34.95Add to basket ›