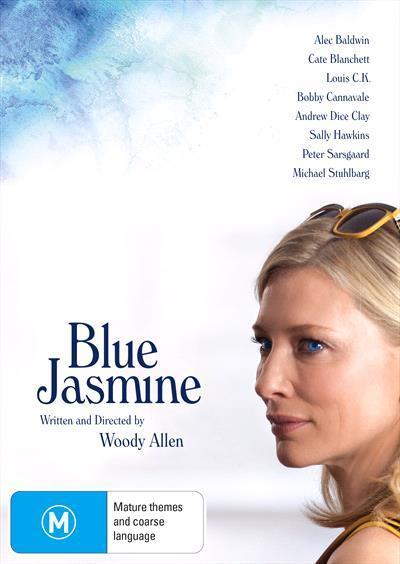 After everything in her life falls to pieces, including her marriage to wealthy businessman Hal (Alec Baldwin), elegant New York socialite Jasmine (Cate Blanchett) moves into her sister Ginger’s (Sally Hawkins) modest apartment in San Francisco to try to pull herself back together again.

Woody Allen hits another home run with this funny, startling reimagining of Tennessee Williams’ seminal stage play A Streetcar Named Desire. Positing the titular Jasmine (Cate Blanchett) in the role of Blanche DuBois, Allen uses Williams’ paradigm to frame his own devastating but blackly funny vision of the social effects of the global financial crisis; in particular, the fall of New York’s elite after indictments for insider trading.

Having had the carpet quite literally pulled from under her feet, Jasmine jumps on a plane to San Francisco to stay with her adoptive sister Ginger (Sally Hawkins) in her modest home filled with cheap knick-knacks and rowdy children. Unwilling to park her Chanel-covered derriere for too long, Jasmine makes plans to work in interior design, and takes on employment as a dentist’s receptionist in the meantime. Determined to help Ginger by insulting her lifestyle as well as her choice in men, Jasmine puts one awkward designer-clad foot in front of the other until the stress of pretending to be who she thinks she is, socially and emotionally, finally becomes too much. Discovering a few home truths about how her excessively privileged lifestyle came at the cost of ordinary folk like her sister, Jasmine’s realisation is one of the greatest dramatic moments recently captured on film.

Comfortably cushioned by an excellent supporting cast including Andrew Dice Clay, Bobby Cannavale and Alec Baldwin, Blanchett gives an incredible, heartstopping performance that will have you gasping for breath under the weight of its gravitas. As always with Allen, the city plays its part too and San Francisco is nicely poised as the colourful and lively alternative to steely NYC. A dramatic delight, this is Allen at the top of his game.