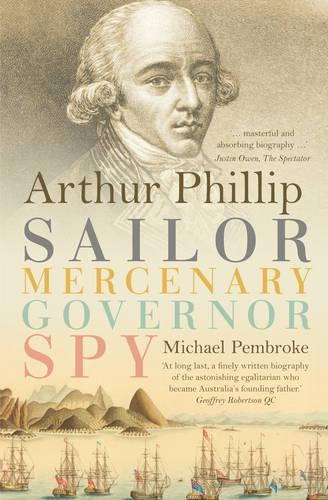 Australians know Arthur Phillip as the first Governor of the colony of New South Wales. But few know the real story of this mercurial man. Arthur Phillip was a career soldier, a mercenary and a spy for the British Empire long before he captained the First Fleet and founded Sydney.
Through meticulous research, Michael Pembroke has discovered the amazing story behind Australia’s first Governor, Arthur Phillip. The story of Phillip’s life takes us through wars with Spain and France, battles, court martials, and the taking of Havana from the Spanish. In his 20s he married a wealthy widow (with a pre-nup agreement) and briefly became a gentleman farmer. The marriage ended in divorce, before such a thing existed in England, but Phillip then became a successful merchant in France and likely spy for England. In 1774 he  became a paid mercenary for the Portuguese navy at the behest of the Admiralty - his enemy again was Spain but now in South America. Upon his return to London some years later, the revolution in the American colonies triggered another war with France and then Spain as well.
England faced the possibility of its first invasion since 1588 and Phillip became the commander of a 74 gun ship with a crew of 600 men defending the channel. Phillip is revealed to have undertaken secret missions for the Admiralty throughout his career and perhaps was among the first to be a part of the Secret Service. And finally it is revealed that the establishment of the colonies in New South Wales were an extension of Phillips work for England. A trusted and strategic thinker who would make sure that England ruled the waves.
$29.99Add to basket ›