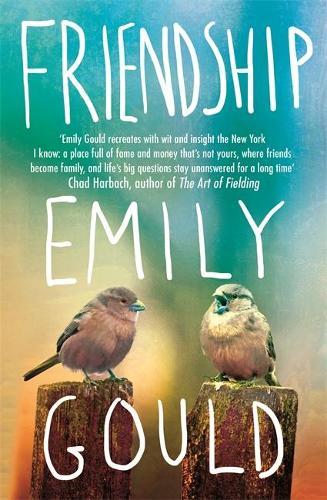 Bev Tunney and Amy Schein are best friends, but now, at thirty, they have reached a crossroads. Bev is stuck in circumstances that would have barely passed muster in her mid-twenties: temping, living in a shared house, drowning in debt. Amy is a fiercely charismatic media darling still riding the tailwinds of early success, but reality is catching up with her. And now Bev is unexpectedly pregnant.
As Amy and Bev are dragged into genuine adulthood, they are forced to contemplate the possibility that growing up might mean growing apart. They want to help each other but can’t help themselves; want to make good decisions, but fall prey to their worst impulses. An encounter with an accomplished older woman, Sally, throws their problems into sharp relief.
Emily Gould’s dazzling debut novel traces the evolution of a friendship with wry sympathy, refreshing honesty and humour.

Bev Tunney and Amy Schwerin have been best friends for years, ever since they worked together in a publishing house in New York City: ‘…we’re a couple, in a way. I mean we’re life partners. All these people […] are going to break up once their sexual chemistry peters out. But we’ll be together forever.’

Bev is a Midwestern striver and Amy is an East Coast princess, cruising through life so far, including in her role at Yidster, an online business for the ‘upwardly mobile urban Jew’ in the cool location of DUMBO where she was initially hired for a three-month gig. Bev is still living life as though she is in her early twenties: temping, living with ‘disgusting roommates’, bogged down in student-loan debt but living beyond her means, buying Comme de Garçons wallets and other accoutrements of bourgeois stability.

Now at 30, their friendship is at a juncture. On a whim, Amy resigns and arrives home to find an eviction note on her door. While her pot-smoking boyfriend, Sam, initially says he is prepared to pay the extra amount given how often he stays there, he picks this ‘opportune’ time to announce he is now heading off to Spain on a fellowship. When Bev accidentally falls pregnant after a one-night stand to a guy she labels ‘father of the year’, abortion seems the only option. Bev feels like a total failure: her idea of transitioning into real adulthood is hinged on having kids.

Amy and Bev want to help each other, but they sometimes can’t even help themselves. They are smart women who want to make good decisions but habitually fall back on their old, self-destructive patterns of behaviour – their good intentions are often overshadowed by their own interests. Emily Gould’s sparkling debut novel examines the evolution of a close friendship between two women, told with wit and empathy.

Emily Harms is Readings’ Marketing Manager and is a regular insomniac in her spare time.