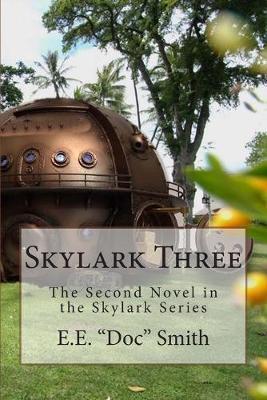 The second book in the classic science fiction series written by E. E. Doc Smith, first published in 1930. In the first book Richard Seaton PhD, has discovered that a previously unknown platinum group metal ( X ) reacts with copper to provide total matter-energy conversion. He and his friend inventor and engineer Martin Crane use it to build simple, high efficiency power stations - and a spacecraft, the Skylark . His exceptionally intellectual, ruthless scientist co-worker Marc DuQuesne (PhD of course) is one of the first people appreciate what Seaton is on to and steals some of the X solution, building a ship too in collaboration with a shady multinational and kidnaps Seaton’s new wife Dorothy taking her into space to try to extract the monopoly from Seaton. After many adventures and discovery of alien civilizations (including Q continuum types) and advanced technology Seaton returns to earth with DuQuesne as his captive, but before he can hand him over to the authorities DuQuesne makes a typically cool headed and audacious escape. The second books starts where the last one finishes as the technology battle between Seaton and DuQuesne escalates using a plethora of cool technologies reaching an unexpected climax. If you’ve enjoyed the Star War or Star Trek franchises the Skylark Series may come as a great surprise and delight to see where so many of your favorite ideas and tropes came from! Frederik Pohl says of the series, With the exception of the works of H. G. Wells, possibly those of Jules Verne-and almost no other writer-it has inspired more imitators and done more to change the nature of all the science fiction written after it Mike Ashley called it the seminal space opera. Damon Knight, praised the novel for its fast, lean plot, an air of excitement, … four characters who are comfortingly bigger than life [and] the feeling that adventures are waiting everywhere, concluding that In The Skylark, everything is big and simple. Smith holds all the original Star Wars patents Arthur C. Clarke