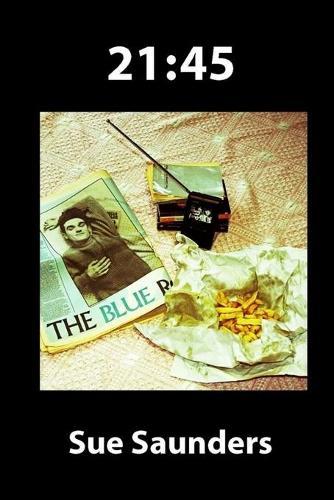 If Holden Caulfield had been a girl, if he’d grown up poor and been obsessed with film noir and French knickers, 21:45 might be his story. The heroine of 21:45 has a unique voice. Funny, dirty, irreverent, inventive, raw. You won’t often encounter such a compelling - yet irritating - female. Her world is grimy and mundane, with unexpected flashes of beauty. Up the Junction meets The Bell Jar on a stairwell.We meet our unnamed heroine, age 21, in the throes of an existential crisis. She has decided to commit suicide. Mise en scene, attire and soundtrack have been attended to. The Smiths feature heavily. Concerned about leaving no trace, she decides to write her memoirs. After a brief dash through her eccentric and movie obsessed childhood, we see our girl discovering alcohol, shoplifting and sex. Disco and punk provide the soundtrack. The location is Fulham, West London. On a (school) night out wearing a shoplifted dress she meets Charlie. This Steve McQueen doppleganger and housebreaker extraordinaire sings ‘Don’t cry Daddy’ in mock Elvis tones in her ear. When he says she looks like a film star her world changes from black and white to technicolour. They become inseparable……..until Charlie gets arrested and sent to prison. Age sixteen, she leaves school. No career plan, no qualifications, no news from Charlie. Margaret Thatcher has just become Prime Minister, UB40 sing about an ivory Madonna.Bored with her first job in a museum (she hides the post and has three hours for lunch) she decides to go to college. Two weeks in she discovers Charlie has died in prison. His brother Frankie delivers the news along with a great deal of swearing and a mystery package.Nothing is ever the same again. In her search for a ‘reason to be’ she buys a beret and turns to existentialism. Attempts to write a novel end in just a handful of poems due to poor stamina. Psychotherapy fails when she is distracted by the hirsuteness of her counsellor. An advert in a lonely hearts column results in a date with Stan Laurel. Seeking a change of scene, she embarks on a budget coach trip round Europe with the elderly. Hairnets and stiff backs dominate. Disconnected and dejected, she still manages to get to know the coach driver intimately. 21 ends with carefully arranged death bed scene, complete with replica gun and still from Gilda.The best coming of age novels leave us wanting to know what happened next. The second part of 21:45 presents the reader with a range of scenarios. Is our middle-aged heroine enjoying an idyllic afterlife with Jake Gyllenhaal? Did she join the army, despite her lethargy? Maybe she moved to the US and married a Gary Cooper look alike. Perhaps the package from Charlie funded a Kerouac style road trip, minus the jazz. Or did she fall in love with Frankie and find her reason to be?