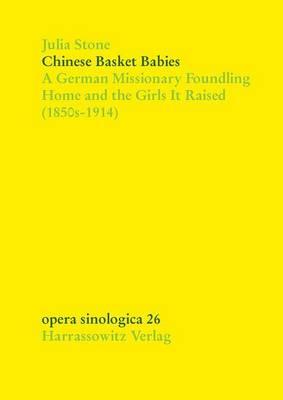 Although the term and its meaning are little known today, everyone knew what foundlings were in the 19th century. They were unwanted infants abandoned by their parents. The plight of such children in China, believed by some to be eaten alive by wild animals, raised an outcry in parts of Western Europe at that time. Chinese Basket Babies is a study of a home intended to rescue these children, almost all baby girls, started by one of the earliest German Protestant women’s missionary associations in the early 1850s. Established in the British colony of Hong Kong, Findelhaus Bethesda (Berlin Foundling Home for Girls) collected and reared unwanted girls until its closure in 1919. It was a bold missionary experiment in social engineering to create ideal Chinese Christian women. Female infanticide and child abandonment were key factors in the mushrooming of foundling homes, both missionary-run and indigenous, in China from the mid-19th century. Julia Stone analyses the complex relationship between the two social phenomena, thereby deepening understanding of the development of child welfare provision in China. However, unlike most scholarly works on Chinese foundling homes, she concentrates on the children and their lives. This is a study of European mothers and Chinese daughters , detailing their everyday interactions and analysing cross-cultural transfers. Reconstructed biographies uncover their lives after arranged marriages to Christians. Many pioneered new roles for women in southern Guangdong province. Chinese Basket Babies is the first micro-study of a Western missionary foundling home in 19th-century China.