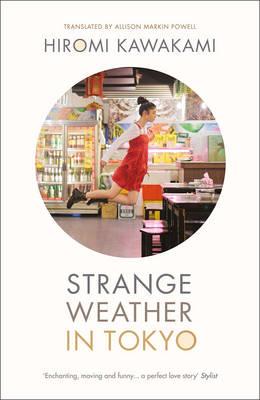 Tsukiko is in her late 30s and living alone when one night she happens to meet one of her former high school teachers, ‘Sensei’, in a bar. He is at least thirty years her senior, retired and, she presumes, a widower. After this initial encounter, the pair continue to meet occasionally to share food and drink sake, and as the seasons pass - from spring cherry blossom to autumnal mushrooms - Tsukiko and Sensei come to develop a hesitant intimacy which tilts awkwardly and poignantly into love.
Perfectly constructed, funny, and moving, Strange Weather in Tokyo is a tale of modern Japan and old-fashioned romance.

Strange Weather in Tokyo is a tender love story that drifts with the lightness of a leaf on a stream. Subtle and touching, this is a novel about loneliness, assuaged by an unlikely romance, and brought to life by one of Japan’s most engaging contemporary writers.

38-year-old Tsukiko lives alone and is resigned to a quiet, solitary life. One night when she is out drinking sake alone at a bar, she runs into one of her former high school teachers, who is also drinking alone. Sensei, as she calls him, is a reserved, formal man at least 30 years her senior. Like Tsukiko, he has been on his own for a long time, and like her, he is comfortable that way. Yet they continue to meet, often by chance, to drink sake and share food, and as the seasons change a quietly affectionate friendship blooms.

The story follows the gentle ebbs and flows of their relationship over the course of several years. The passage of the seasons marks the time, from a frosty morning hunting for mushrooms in the mountains to a party celebrating the mesmerising beauty of the cherry blossom trees. Nature is treated delicately, revealing Hiromi Kawakami’s gift for evoking an atmosphere in just a few spare lines, much like haiku.

As Tsukiko slowly develops romantic feelings for Sensei, the cinematic, dreamlike quality of the novel seems to build: “At some point, sitting beside Sensei, I began to notice the heat that radiated from his body. Through his starched shirt, there came a sense of Sensei. A feeling of nostalgia.” They approach the idea of love hesitantly, and as they navigate this uncertain terrain there is a feeling of hope, tempered strangely with sadness.

First published in Japan in 2001 as Sensei no Kaban (The Teacher’s Briefcase), the recently translated Strange Weather in Tokyo was shortlisted for the 2012 Man Asian Literary Prize.

Rebecca Howden is a freelance reviewer.