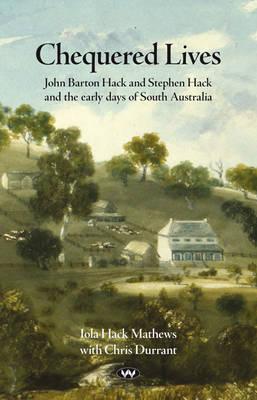 Chequered Lives is the fascinating story of a Quaker family from England who camped on the beach in 1837 before the city of Adelaide was created, but rose to owning a 3000-acre estate in the Adelaide Hills. Barton Hack built his first house where the Adelaide Railway station now stands, became a merchant who owned ships, a whaling station and the first vineyard in the Province, and was chairman of the first Chamber of Commerce in Australia. His younger brother Stephen became a grazier and explorer. After they lost everything in the crash of 1841-1843, their lives took a very different turn.
When Barton’s great-great-granddaughter, journalist Iola Mathews, opened a trunk full of their letters, diaries and memoirs, she knew she had to write the family’s story. ‘As this detailed and gripping account shows, there were no guarantees in the rough and tumble of colonial life, and the ambitious Hack brothers encountered success and failure, joy, tragedy, and family division.
Chequered Lives is a great story, fascinating and moving and very well told.’ - Brian Matthews, Honorary Professor of English at Flinders University and award-winning biographer and columnist ‘I couldn’t put it down …it is an important work about early South Australia, and particularly of the Society of Friends.’ - Charles Stevenson, author of The Millionth Snowflake: The history of Quakers in South Australia
$73.95Add to basket ›