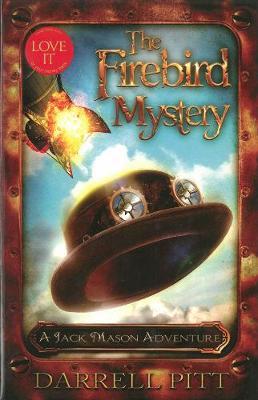 Jack Mason has grown up as an acrobat in a circus. Now, after the tragic death of his parents, he must live inside the gloomy walls of Sunnyside Orphanage in London, a city of fog and snow, filled with airships, steam cars and metrotowers that stretch into space. Luckily for Jack, he’s taken under the wing of the brilliant and eccentric detective Ignatius Doyle. Little does he know how dangerous life is about to become.
A girl named Scarlet Bell comes seeking the great detective’s help. Her father has been kidnapped, and the future of the world itself may be at stake. Is the evil hand of Professor M pulling all the strings?
Mr Doyle and Jack know there is no time to lose.
With all its twists and turns and helter-skelter action, The Firebird Mystery is an addictive story and a spellbinding homage to the world of Victorian literature that will appeal to readers of all ages.

Teenage orphan Jack Mason keenly misses his circus performer parents, but his harsh and grounded life at Sunnyside Orphanage takes a sudden leap when eccentric Ignatius Doyle, a consulting detective, offers Jack employment as well as a father figure, of sorts. Doyle recognises that Jack’s considerable acrobatic skills, bravery and quick-thinking are the ideal complement to his own knack for acute observation and mystery-solving.

Their first case begins with a missing person but quickly escalates into a dramatic plot to save the world from a very surprising villain. Along the way there are references to great works of art, historical characters (in alternative roles) and Nazism. Pitt keeps it light with humour and far-fetched rescues. Readers will also enjoy the steam-powered transport – air ships and space steamers – as well as the 200-mile-high metro tower.

This is Jack Mason’s second outing – Pitt previously published an early version of this story himself – and readers won’t have long to wait for the sequel. Recommended for ages 9 and up.

END_OF_DOCUMENT_TOKEN_TO_BE_REPLACED

The Little Factory of Illustration