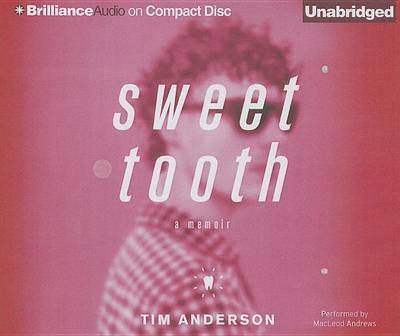 Dishy…with a Smiths soundtrack [and] a Sedaris streak. -Brian Howe, INDY Week A gifted writer, Anderson is…delightful in his irreverence, and astutely aware of himself and his particular perspective. His observations are often laugh-out-loud funny and will leave readers with the desire to…keep turning the pages… -Publishers Weekly review for Anderson, author of Tune in Tokyo and Sweet ToothWhat’s a sweets-loving young boy growing up gay in North Carolina in the eighties supposed to think when he’s diagnosed with type 1 diabetes? That God is punishing him, naturally.This was, after all, when gay-hating Jesse Helms was his senator, AIDS was still the boogeyman, and no one was saying, It gets better. And if stealing a copy of a gay porno magazine from the newsagent was a sin, then surely what the men inside were doing to one another was much worse.Sweet Tooth is Tim Anderson’s uproarious memoir of life after his hormones and blood sugar both went berserk at the age of fifteen. With Morrissey and The Smiths as the soundtrack, Anderson self-deprecatingly recalls love affairs with vests and donuts, first crushes, coming out, and inaugural trips to gay bars. What emerges is the story of a young man trying to build a future that won’t involve crippling loneliness or losing a foot to his disease-and maybe even one that, no matter how unpredictable, can still be pretty sweet.