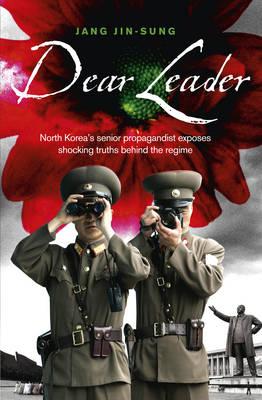 Dear Leader contains astonishing new insights about North Korea which could only be revealed by someone working high up in the regime. It is also the gripping story of how a member of the inner circle of this enigmatic country became its most courageous, outspoken critic.
Jang Jin-sung held one of the most senior ranks in North Korea’s propaganda machine, helping tighten the regime’s grip over its people. Among his tasks were developing the founding myth of North Korea, posing undercover as a South Korean intellectual and writing epic poems in support of the dictator, Kim Jong-il. Young and ambitious, his patriotic work secured him a bizarre audience with Kim Jong-il himself, thus granting him special status as one of the ‘Admitted’. This meant special food provisions, a travel pass and immunity from prosecution and harm. He was privy to state secrets, including military and diplomatic policies, how the devastating ‘Scrutiny’ was effected, and the real position of one of the country’s most powerful, elusive men, Im Tong-ok.
Because he was praised by the Dear Leader himself, he had every reason to feel satisfied with his lot and safe. Yet he could not ignore his conscience, or the disparity between his life and that of those he saw starving on the street. After breaking security rules, Jang Jin-sung, together with a close friend, was forced to flee for his life: away from lies and deceit, towards truth and freedom.

North Korea and its ruling Kim dynasty are often ridiculed in the West as eccentric megalomaniacs with odd habits and funny hair. But for those living under the country’s totalitarian regime, whose daily life – entertainment, relationships, even language itself – revolves around total obedience to the ‘Dear Leader’, whose whims and grudges are a matter of life and death.

Dear Leader is the incredible true story of Jang Jin-sung, a propaganda poet working in the counter-intelligence division, who finds himself hand-picked as a favourite of Kim Jong-il (who died in December 2011) – an honour that affords Jang a life of luxury in the communist state. However, upon witnessing staggering levels of brutality and famine on a trip to his hometown, he becomes restless, and yearns ‘to write realist poetry based on what I saw, and not loyalist poetry based on what we were all told to see’. When a misplaced document leads to charges of treason, Jang and a friend become fugitives, fleeing to China with the aim of seeking asylum in South Korea.

Lost, penniless and surviving only on the kindness of strangers, Jang’s harrowing account of life on the run brims with danger, secrecy and near-misses – it’s a thrilling read. Underneath this action-packed narrative runs an ever-present current of deep sadness, as Jang interweaves his story with recounted experiences and explanations of the regime’s corruption and cruelty. Jang exposes Orwellian levels of propaganda, convoluted military double-bluffs aimed at South Korea and the West, and Kim Jong-il’s manipulation of the cult of Kim Il-sung to remove his enemies and silently usurp his father – all while the North Korean people starved. Dear Leader is a rewarding read and an important book – not only for the secrets it exposes, but as a comprehensive introduction for general readers into the diabolical circumstances faced by the people of the Hermit Kingdom.

END_OF_DOCUMENT_TOKEN_TO_BE_REPLACED

Working Stiff: 2 Years, 262 Bodies and the Making of a Medical Examiner

Glass of Fashion : A Personal History of Fifty Years of Changing Tastes and the People Who Have Inspired Them