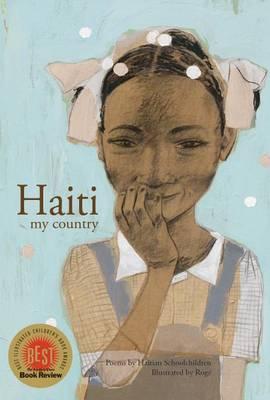 Pretty flowers in my country are for me Like pink butterflies That smile at the sun - Judes-Roldes For several months, Quebec illustrator Roge prepared a series of portraits of Haitian children. Students of Camp Perrin wrote the accompanying poems, which create, with flowing consistency, Haiti, my country. These teenaged poets use the Haitian landscape as their easel. The nature that envelops them is quite clearly their main subject. While misery often storms through Haiti in the form of earthquakes, cyclones, or floods, these young men and women see their surrounding nature as assurance for a joyful, confident future. First published in French in 2010 as Haiti mon pays. It won several awards and nominations, including: Governor General Finalist 2011 (children’s illustration category) Communication-Jeunesse Selection Laureat Prix Saint Exupery 2011 (French category) Laureat Prix Applied Arts 2011 (illustrations category) Laureat Prix Illustration Lux 2011 (book category) White Ravens Selection 2012