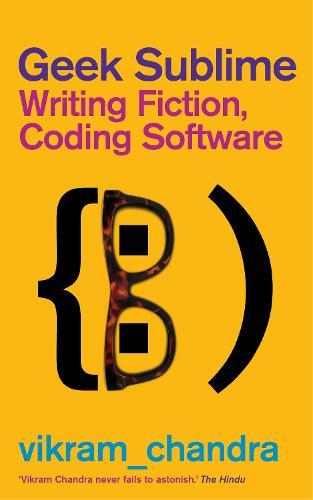 This is a great novelist on his twin obsessions: writing and coding. What is the relationship between the two? Is there such a thing as the sublime in code? Can we ascribe beauty to the craft of coding? Vikram Chandra is the award-winning author of two acclaimed novels and a collection of short stories - and has been a computer programmer for almost as long as he has been a writer. In his extraordinary new book he looks at the connection between these two worlds of art and technology.
Coders are obsessed with elegance and style, just as writers are, but do the words mean the same thing to both? And is it a coincidence that Chandra is drawn to two seemingly opposing ways of thinking? Exploring these questions, Chandra creates an idiosyncratic history of coding - exploring such varied topics as logic gates and literary modernism, the male machismo of geeks, the striking presence of an ‘Indian Mafia’ in Silicon Valley, and the writings of Abhinavagupta, the 10th-11th century Kashmiri thinker. Part technology story and part memoir, Geek Sublime is a book of sweeping ideas. It is a heady and utterly original work.

For most of us, computers and the programs that run on them are tools, designed to make our lives and work easier. But for the developers who build this software, the lines of code that underpin what we see on screen are not just practical – they can be beautiful. ‘Beautiful’ code is concise, structured and linguistically flexible – as such, many programmers see their work as a creative practice, akin to creating music, or literature.

Award-winning novelist Vikram Chandra is thus in a unique position, having worked as a programmer alongside his writing career. In Geek Sublime, Chandra’s first work of non-fiction, he recounts his early career as an Indian student in New York, and his gradual turn to coding as both a way to make money and a relief from fiction: ‘Write some code, and it either works or it doesn’t.’ From here, Chandra launches into an impressively broad history of computer science, its transition from egalitarian beginnings to modern Silicon Valley’s issues with race and gender, India’s post-colonial emergence as a programming powerhouse and the evolving thinking around code as a matter of form as well as function.

The book’s second half takes on a decidedly more academic tone, as Geek Sublime evolves into an exploration of the concept of beauty and consciousness through the perspective of pre-modern South Asian philosophy and Sanskrit, a language with such strict structure and grammar that parallels can be drawn with modern programming languages. Chandra’s thesis covers so much ground as to lose focus at times – a diversion into tantric sexual practice, though fascinating, feels unnecessary – and casual readers might struggle with the book’s heavier sections. For readers of philosophy and literary theory, however, Geek Sublime offers a valuable contribution to the discussion around art in the age of technology.

END_OF_DOCUMENT_TOKEN_TO_BE_REPLACED

Working Stiff: 2 Years, 262 Bodies and the Making of a Medical Examiner

Glass of Fashion : A Personal History of Fifty Years of Changing Tastes and the People Who Have Inspired Them