John C. Calhoun and the Price of Union: A Biography 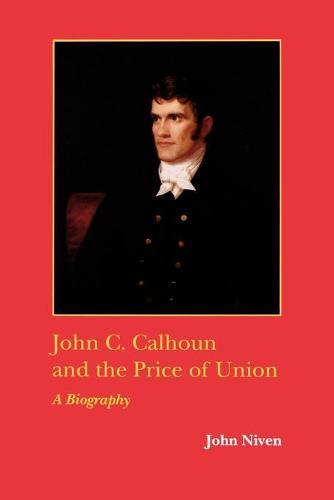 John C. Calhoun and the Price of Union: A Biography

John C. Calhoun (1782-1850) was one of the prominent figure of American politics in the first half of the nineteenth century. The son of a slaveholding South Carolina family, he served in the federal government in various capacities, as senator from his home state, as secretary of war and secretary of state, and as vice-president in the administrations of John Quincy Adams and Andrew Jackson. Calhoun was a staunch supporter of the interests of his state and region. His battle from tariff reform, aimed at alleviating the economic problems of the southern states, eventually led him to formulate his famous nullification doctrine, which asserted the right of states to declare federal laws null and void within their own boundaries. In the first full-scale biography of Calhoun in almost half a century, John Niven skillfully presents a new interpretation of this preeminent spokesman of the Old South. Deftly blending Calhoun’s public career with important elements of his private life, Niven shows Calhoun to have been at once a more consistent politician and a far more complex human being than previous historians have thought. Rather than history’s image of an assured, self-confident Calhoun, Niven reveals a figure who was in many ways insecure and defensive. Niven maintains that the War of 1812, which Calhoun helped instigate and which nearly resulted in the nation’s ruin, made a lasting impression on Calhoun’s mind and personality. From that point until the end of his life, he sought security first from the western Indians and the British while he was secretary of war, then from northern exploitation of southern wealth through what he regarded as manipulation of public policy while he was vice-president and a senator. He worked tirelessly to further the South’s slave-plantation system of economic and social values. He sought protection for a region that he freely admitted was low in population and poor in material resources, and he defended a position that he knew was morally inferior. Niven portrays Calhoun as a driven, tragic figure whose ambitions and personal desires to achieve leadership and compensate for a lack of inner assurance were often thwarted. The life he made for himself, the peace he felt on his plantation with his dependent retainers, and the agricultural pursuits that represented to him and his neighbors stability in a rapidly changing environment were beyond price. Calhoun sought to resist any menace to this way of life with all the force of his character and intellect. Yet in the end Calhoun’s headstrong allegiance to his region helped to destroy the very culture he sought to preserve and disrupted the Union he had hoped to keep whole. Niven’s masterful retelling of Calhoun’s eventful life is a model biography.