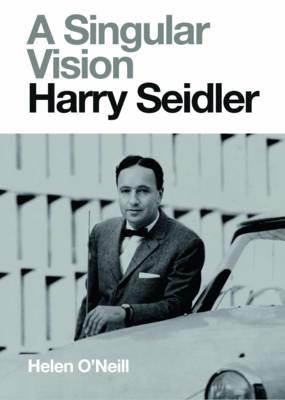 Harry Seidler, a stylish, decisive and highly opinionated man, was a key figure in international modern architecture and in the establishment of post-war modern design in Australia. He emerged as Australia’s preeminent architect, the man who effectively shaped the look of modern, urban Australia. While many know his buildings, few know his fascinating story.
Born in Austria to an affluent Jewish family, his world fell apart when as a young boy he had to flee the looming Nazi threat. Without family and without a word of English, he escaped to England. Later, cruelly, he was interned as an enemy alien during the war, and sent to Canada. During his time in the Canadian camp, he virtually taught himself architecture, and once the war was over, studied in Canada and at Harvard in the United States.
His parents moved to Australia after the war, and in 1948, Harry came to Australia in response to their invitation to design a house for them. The house he built for them, now known as the Rose Seidler House, represented a huge shift in Australian modern domestic architecture. It was soon followed by a succession of innovative house designs. He followed these with amibitious, towering office blocks, such as Australia Square and the MLC Centre, forever changing the skyline of Australia’s cities. Without Harry Seidler, our cities and homes would look very, very different.
A lavishly illustrated, stylish and beautifully designed book, A Singular Vision is a celebration of one man’s extraordinary life, his influence, and his many towering achievements.
$62.99Add to basket ›