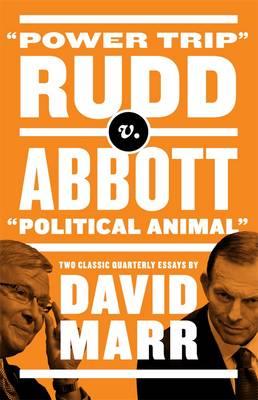 Kevin Rudd and Tony Abbott have resumed battle for leadership of the nation. Here, in one volume, are their definitive portraits by Australia’s pre-eminent biographer and investigative journalist.
Power Trip shows the making of Kevin Rudd, from the formative tragedy of his life the death of his father to his years as Wayne Gosss right-hand man, his relentless work in federal Opposition and finally his record as prime minister. Throughout Rudds life, Marr finds recurring patterns: a tendency to chaos, a mania for control, a strange mix of heady ambition and retreat and what has so far been an unbreakable bond with the public.
In Political Animal, Marr examines the question that Australians are asking of Tony Abbott: what kind of man is he and how might he run the country? Part fighter and part charmer, Abbott is deeply religious and deeply political. What happens when his values clash with his absolute determination to win? That is the great puzzle of a career that began as a wild university politician in the 1970s and seeks culmination in the prime ministership.
Rudd v. Abbott is an essential companion for voters as they consider who should take control of Australias future.
$19.99Add to basket ›