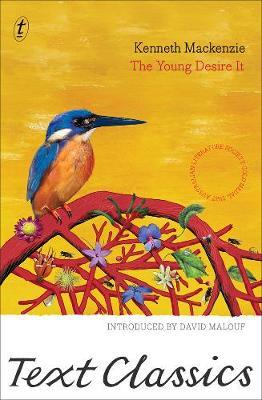 In the late afternoon of a day in February, that hottest of Australian summer months, when a brutal sun stood bronze above the river flats which you may see from the dormitory windows of Chatterton, Charles came to the school with his mother, walking from the railway station to the gates by a private path across a burnt, untidy field, overhung with Cape lilacs that still drooped, dusty and melancholy…In the lower part of his belly fear kicked and pulsed like a child in the womb, ready to be born.
Fifteen-year-old Charles Fox is sent away to boarding school, innocent, alone and afraid. There one of his masters develops an intense attachment to him. But when Charles meets Margaret, a girl staying at a nearby farm for the holidays, he is besotted, and a passionate, unforgettable romance begins.
Published in London in 1937 to wide acclaim, The Young Desire It is a stunning debut novel about coming of age: an intimate and lyrical account of first love, and a rich evocation of rural Western Australia. It won the Australian Literature Society Gold Medal, and is now back in print for the first time in years with a new introduction by David Malouf.

The Young Desire It was awarded the ALS Gold Medal in 1937, when the author was only 24. This extraordinary book, like many first novels, is largely autobiographical – the defining years of protagonist Charles Fox are simply crafted in terms of plot and structure (this is a coming-of-age story, set in an all-male boarding school in 1920s rural Western Australia) – but Kenneth Mackenzie’s apprenticeship novel is astonishing in terms of characterisation, language, its depiction of the natural world and, especially, in terms of a felt or lived narrative.

The third-person narrator’s voice has – for the most part – been assimilated into Charles’s viewpoint. As he has lived his first 14 years in the sole company of his mother, free to roam the property, Charles has developed into a sensitive young man attune to the caprices of the natural landscape. This voice, then, with its deeply interior perspective, leads us, poetically and astoundingly, deeper into the experience: of growing up, of sexual awakening, of the natural world, of fear and of knowledge.

The language throughout is extraordinary. It’s not an entirely easy read: the tone and pace is unmodulated, with no markers to identify perspective changes or highlight plot points. But the result is a rolling swell of remarkable turns of phrase, odd constructions, unusual language, and a narrative that builds upon itself until the prose experience engulfs you.

The Young Desire It will ask you – many times – to pause in your reading. Innumerable passages stand out and ask something (a step sideways, an interior movement, another read). My personal favourite: ‘And the gates swallowed them, like the blind open jaws of a dead shark, sinister and smally cathedraline.’

If words, cadence and language are your thing, read this book – Mackenzie has rendered it an astonishing experience.