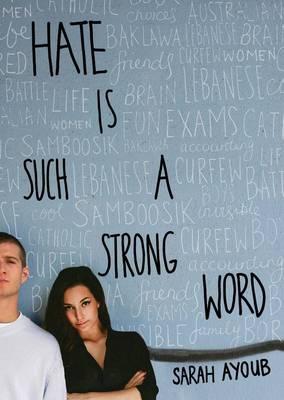 In the vein of Does My Head Look Big In This? and Looking for Alibrandi, Hate Is Such A Strong Word is the story of a seventeen-year-old girl caught between two cultures, Lebanese and Anglo Australian.
Seventeen-year-old Sophie hates Monday mornings, socks worn with sandals, and having to strategise like she’s a battle sergeant every time she asks her parents if she can go out. But she especially hates being stereotyped because she’s Lebanese. When New Guy, Shehadie Goldsmith, is alienated at her Lebanese school because his dad’s Australian, she hates the way it makes her feel. Like she’s just as prejudiced as everyone else. Like she could make a difference if she stopped pretending she’s invisible. Like the attraction between them might be too strong to fight.. .But hate is such a strong word… Can Sophie find the strength to speak out - even if it means going against everything she’s been brought up to believe?
A brilliant debut novel about identity, love, culture and finding your place.
$19.99Add to basket ›

Recommended YA Fiction Set In An Australian High School

END_OF_DOCUMENT_TOKEN_TO_BE_REPLACED

Head of the River

I’ll Tell You Mine