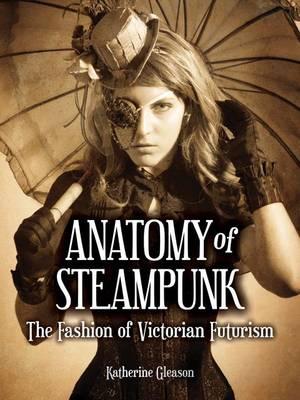 From formal outfits to costumes crafted for the stage, from ensembles suited to adventure to casual street styles, steampunk fashion has come to encompass quite a few different looks. But what exactly is steampunk? Originally conceived as a literary genre, the term steampunk described stories set in a steam-powered, science fiction-infused, Victorian London. Today steampunk has grown to become an aesthetic that fuels many varied art forms. Steampunk has also widened its cultural scope. Many steampunk practitioners, rather than confining their vision to one European city, imagine steam-driven societies all over the world. Today the vibrance of steampunk inspires a wide range of individuals, including designers of high fashion, home sewers, crafters, and ordinary folks who just want to have fun. Steampunk fashion is not only entertaining, dynamic, and irreverent; it can also be colorful, sexy, and provocative. Most of all, steampunk fashion is accessible to everyone. Illustrated throughout with color photographs of the dazzling creations of numerous steampunk fashion designers, Anatomy of Steampunk is an inspirational sourcebook. In addition to presenting the looks and stories of these creative fashion artists, the book also details ten steampunk projects for the reader to try at home. Allow steam to power your imagination!Designers and steampunk groups featured in the book include–Airship Isabella, Ali Fateh, Berit New York, Black Garden, Blaspheminas Closet, Brute Force Studios, Clockwork Couture. DASOWL, Dawnamatrix, The Extraordinary Contraptions, Festooned Butterfly, Harvash, Hi Tek by Alexander, House of Canney, KMKDesigns, Kristi Smart, Kristin Costa, KvO Design, Lastwear, The League of S.T.E.A.M., Marquis of Vaudeville, Megan Maude, Michael Salerno, Morrigan New York, Ms. Purdys, Muses Well, Redfield Design, RockLove, Sidharta Aryan, SkinzNhydez, Spyder Designs, Tokyo Inventors Society, Tom Banwell, and The Uprising of the Gin Rebellion. A longtime admirer of steampunk style, Katherine Gleason is the author of more than thirty books for adults and young people, including Alexander McQueen: Evolution (Race Point Publishing, 2012). Her short stories have appeared in Alimentum: The Literature of Food, Cream City Review, Mississippi Review Online, River Styx, and Southeast Review. She has also written articles for a number of periodicals, including the Boston Globe, Connoisseur, and Womens Feature Service. K. W. Jeter is the author of Morlock Night, Dr. Adder, The Glass Hammer, Noir, and other visionary science fiction and dark fantasy. In 1987, when discussing his novel Infernal Devices, he coined the term steampunk. The sequel to that book is Fiendish Schemes (Tor Books, 2013). A native of Los Angeles, he currently lives in Ecuador.Diana M. Pho possesses a deep-seated love of science fiction and fantasy literature. Known as Ay-leen the Peacemaker in the steampunk community, she has written academically about steampunk and lectures professionally across the United States. Diana also runs the multicultural steampunk blog Beyond Victoriana (www.beyondvictoriana.com). She currently lives and works in New York City.