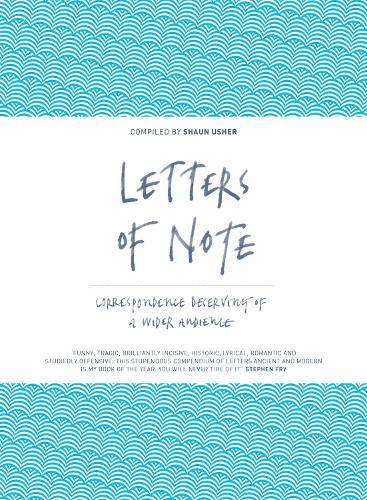 Letters of Note is a collection of one hundred and twenty five of the world’s most entertaining, inspiring and unusual letters, based on the seismically popular website of the same name - an online museum of correspondence visited by over 70 million people.
From Virginia Woolf’s heart-breaking suicide letter, to Queen Elizabeth II’s recipe for drop scones sent to President Eisenhower; from the first recorded use of the expression ‘OMG’ in a letter to Winston Churchill, to Gandhi’s appeal for calm to Hitler; and from Iggy Pop’s beautiful letter of advice to a troubled young fan, to Leonardo da Vinci’s remarkable job application letter, Letters of Note is a celebration of the power of written correspondence which captures the humour, seriousness, sadness and brilliance that make up all of our lives.
Including letters from: Queen Elizabeth II, Elvis Presley, Charles Schulz, Leonardo da Vinci, Iggy Pop, Fidel Castro, Anais Nin, Fyodor Dostoevsky, Amelia Earhart, Charles Darwin, Roald Dahl, Albert Einstein, Dorothy Parker, John F. Kennedy, Groucho Marx, Charles Dickens, Katharine Hepburn, Mick Jagger, Steve Martin, Clementine Churchill, Ray Bradbury, Kurt Vonnegut and many more.
$59.99Add to basket ›

END_OF_DOCUMENT_TOKEN_TO_BE_REPLACED

The Gorgeous Nothingss - the first full-colour facsimile edition of Emily Dickinson's manuscripts ever to appear - is a deluxe edition of her late writings, presenting this crucially important, experimental late work exactly as...

Offers a collection of one hundred and twenty five of the world's most entertaining, inspiring and unusual letters, based on the seismically popular website of the same name - an online museum of correspondence visited by over 70...

Yours Truly: Women of Letters

The act of letter writing allows us to slow down and truly connect, with a person, a subject, an idea. At their hugely popular Women of Letters events, Marieke Hardy and Michaela McGuire encourage and allow our best and brightest...