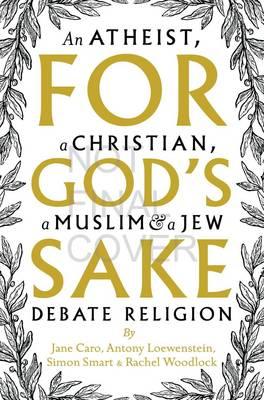 Four of Australia’s most interesting religious - and anti-religious - thinkers come together to ask and answer the big questions, such as: What is the nature of the universe? What is a good life? How do we account for evil? and Where do we find hope?
Along the way we are introduced to the detail of different belief systems - Judaism, Christianity, Islam - and to the argument that atheism, like organised religion, has its own compelling logic. This is a fascinating exercise in comparative religion and a philosophical tour de force, but also an entertaining and honest insight into the life events that led each author to their current position.
Antony Lowenstein is proudly culturally Jewish but vehemently anti-orthodox. Jane Caro flirted briefly with spiritual belief, inspired by 19th century literary heroines such as Elizabeth Gaskell and the Bronte sisters. Rachael Woodlock grew up in the alternative embrace of Baha'i belief but chose Islam as the religion that would best support her into adulthood. Simon Smart is firmly and resolutely a Christian, but one who has his most profound spiritual moments while surfing.
Provocative, informative and passionately argued, For God’s Sake encourages us to accept religious differences but to also challenge more vigorously the beliefs that create discord.

Religion, in its various forms, has delivered both immeasurable joy and terrible conflict throughout history. Currently, many ‘neo-atheists’ predict the death of organised religion within a generation. In For God’s Sake, four prominent thinkers address and debate the differences and commonalities between their various faiths (or non-faiths), and the place of religion in the modern world, both in relation to the self and to society.

Journalist Antony Loewenstein is culturally Jewish but spiritually an atheist. For him, the conflation of politics and religion (particularly the tendency to view criticism of Israel as anti-Semitic) is particularly troubling. Atheist commentator Jane Caro writes in a style that is often blunt but always deeply personal. For Caro, there is great peace in the idea of a logical but indifferent universe. For Simon Smart, a Christian, there is no dichotomy between science and faith – they merely answer different questions. Smart, while perhaps the most defensive in tone, highlights the charity and compassion emphasised by Christianity as pivotal to the freedoms of modern society.

Perhaps the most moving contributions are from Muslim academic Rachel Woodlock, who writes with passion, clarity and humour on the joy (as illustrated by some staggeringly beautiful Qur’anic verses) she finds in a religion so often misunderstood in the West.

All, to varying degrees, describe fundamentalism in any religion as a ‘corruption’ – as Woodlock writes, ‘because all the great traditions teach … compassion towards others, where there is violence, barbarity, prejudice and hatred … the tradition has been corrupted'.

While all four are passionate in defending their beliefs and contesting one anothers', there are no attempts to proclaim a ‘winner’. The authors are always respectful, insightful and open-minded. It is fascinating to read each faith’s (often-conflicting but equally ‘true’) answers to the same fundamental questions. Engrossing and enlightening, For God’s Sake is an important addition to a complex and ongoing discussion.

This is a fascinating exercise in comparative religion and a philosophical tour de force, but also an entertaining and honest insight into the life events that led each author to their current position. Provocative,...