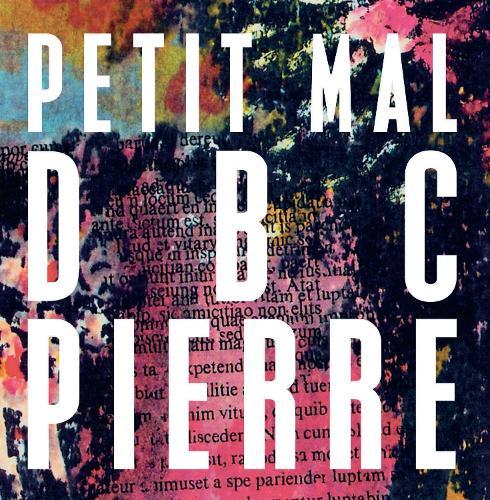 If you are familiar with the explosive End Times Trilogy by DBC Pierre, you will be well-acclimatised to the heady heights traversed in this collection.
Drawing on memoir and a life lived in pursuit of sensation, but always ignited by the flame of fiction, Petit Mallegories take us further into the imagination of one of the most radically original prose stylists of the past decade. Accompanied by dozens of illustrations and photographic ‘evidence’, the stories here inhabit worlds defined by appetite, excess and transcendence.
Whether through food, drink, sex, drugs, or a fantastic cocktail of all four, the impulse in this book is towards epiphany. And the inevitable hangover that follows. But even that (or those) in the world of DBC Pierre can be nourishing.

Petit Mal isn’t a conventional memoir, but then again there’s nothing conventional about its author, DBC Pierre. His nickname concealed by initials (‘Dirty But Clean’) only scratches the surface of a life story as entertaining as any fiction. Australian born, raised mostly in Mexico, Pierre became a public name after winning the Booker Prize for his first novel, Vernon God Little. The monetary award for the prize of £50,000 infamously only partially paid off Pierre’s debts, incurred after more than a decade spent in a drug-induced haze (peppered with the odd conviction for illegally importing organic corn, or a near-fatal car crash).

Safe to say Pierre seems like a pretty interesting guy. So the fact that his latest work, Petit Mal, draws on his ‘life lived in the pursuit of sensation’, should pique the curiosity of any avid fan of his End Times trilogy.

Reading Petit Mal feels a bit like tumbling with Alice down the rabbithole. Trawling through this collection of flash fictions, philosophical musings and prose poems interspersed with cartoons, drawings and photographs is as disorientating a process as it is entertaining. The book itself, the size of a CD case, is a beautiful artifact. The glossy illustrations both complement Pierre’s writing, and contradict it. But while Pierre is a witty cartoonist, his amusing and thought-provoking prose stands out as this work’s most intriguing feature.

It’s difficult to draw a connecting thread between all the aphoristic elements that make up Petit Mal, but it seems that’s entirely the point. In an essay towards the end, Pierre endorses his notion of ‘romancing chaos’. He explains that ‘awareness, playfulness, a palate for insecurity’ are the foundation for his ‘motifs and miniatures of accident, nature and legend’. Though Petit Mal does not follow what is expected, it offers instead a collection of completely surreal moments that are bound to excite any fan of Pierre’s work, or someone looking for something completely out of the ordinary.

Stella Charls works as a bookseller at Readings Carlton.