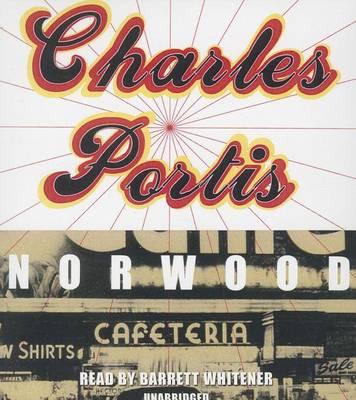 Norwood, the first novel by the long-acclaimed Charles Portis, is an outstanding example of the cool wit and unique style that has made Portis one of America’s greatest writers. Out of the American neon desert of rollerdromes, chili parlors, the Grand Ole Opry, and girls who want to live in a trailer and play records all night comes an ex-marine and troubadour, Norwood Pratt. Sent on a mission to New York by Grady Fring, the Kredit King, Norwood has visions of speeding across the country in a late-model car, seeing all the sights. Instead, he gets involved in a wild journey that takes him in and out of stolen cars, freight trains, and buses. By the time he returns home to Ralph, Texas, Norwood has met his true love, Rita Lee, on a Trailways bus; befriended Edmund B. Ratner, the second shortest midget in show business and the world’s smallest perfect fat man ; and helped Joann, the chicken with a college education, to realize her true potential in life. As with all of Portis' fiction, the tone is cool, sympathetic, funny, and undeniably American.