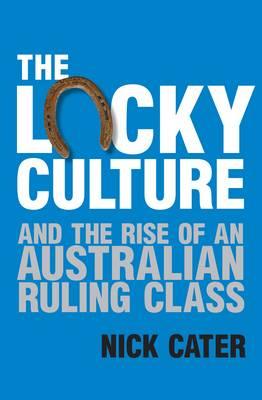 A bold and provocative book about Australia’s national identity and how it is threatened by the rise of a ruling class.
Nick Cater, senior editor at The Australian, tracks the seismic changes in Australian culture and outlook since Donald Horne wrote The Lucky Country in 1964.  His belief is that countries don’t get lucky; people do. The secret of Australia’s good fortune is not found in its geography or history. The key to its success is the Australian character, the nation’s greatest renewable resource.
Liberated from the constraints of the old world, Australia’s pioneers mined their reserves of enterprise, energy and ingenuity to build the great civilization of the south. Their over-riding principle was fairness: everybody had a right to a fair go and was obliged to do the right thing by others.  Today that spirit of egalitarianism is threatened by the rise of a new breed of sophisticated Australians - the ‘bunyip alumni’ - who claim to better understand the demands of the age. Their presumption of elitism and superior virtue tempts them to look down on others and dismiss opposing views.
Half a century after Donald Horne named Australia ‘The Lucky Country’, Nick Cater takes stock of the new battle to define Australia and the rift that divides a presumptive ruling class from a people who refuse to be ruled. The Lucky Culture is a lively and original take on 21st century Australia and its people. Sometimes rousing, often provocative and always good-humoured, its unexpectedly moving message cannot be ignored.
$40.99Add to basket ›