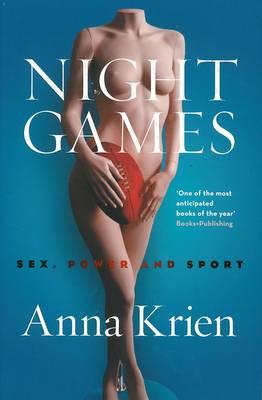 The Pies beat the Saints and the city of Melbourne was still cloaked in black and white crepe paper when the rumour of a pack rape by celebrating footballers began to surface. By morning, the head of the sexual crimes squad confirmed to journalists that they were preparing to question two Collingwood players … And so, as police were confiscating bed sheets from a townhouse in Dorcas Street, South Melbourne, the trial by media began.

In the tradition of Helen Garner’s The First Stone comes another closely observed, controversial book about sex, consent and power. At the centre of it is Anna Krien’s account of the rape trial of a footballer.

Krien offers a balanced and fearless look at the dark side of footy culture - the world of Sam Newman, Ricky Nixon, Matty Johns, the Cronulla Sharks and more. What does a young footballer do to cut loose? At night, some play what they think of as pranks, or games. Night games involving women. These games sometimes involve consensual sex, but sometimes they don’t, and sometimes they fall into a grey area.
Both a courtroom drama and a riveting piece of first-person narrative journalism, this is a breakthrough book from one of the young leading lights of Australian writing.

That football culture is ever-present in Melbourne is a given. Whether you love it, hate it or are indifferent to it, chances are you’ll still know a good deal about it. On a cultural level, its teams and flags are a tangled roadmap of suburban and generational loyalties. In the pub or workplace, its personalities, triumphs and controversies drive conversation like an uncontrollable rumour. On an economic level, it’s a multi-billion-dollar industry. So, whether you’re a fan of the game or not (and I’m not), Anna Krien’s brilliant new book, Night Games, will hold many a revelation.

Krien’s first book, Into the Woods: The Battle of Tasmania’s Forests, enjoyed huge success, and Night Games is her second full-length work of literary journalism. The book begins with the 2010 grand final – in which the Pies beat the Saints after the first match ended in a draw – and the rumour of a pack rape that began to circulate in the days that followed. Something had taken place at a celebratory party at a townhouse in Dorcas Street, South Melbourne. Two Collingwood footballers were linked to the incident, but in the end a young man, also a footballer, though not with the AFL, was charged. Krien follows the vein of the case and its tributaries throughout, all the while stepping further and further back to take a look at the football industry as a whole: its treatment of men and of women, jock culture and media obsession, sexual power play and sexual assault.

The blurb aligns Night Games with the first-person journalistic style of Helen Garner. But where Garner’s persuasion lies with her overwhelming empathy for characters and their laments, Krien’s deftness is to be found in her ability to draw into focus a world of immeasurable complexity. Krien is balanced, yes, but never do you feel that she lacks an opinion. Rather, she lets the facts speak for themselves. That the AFL still relies on a kind of masculine monoculture is evident. But a deeper truth is at stake here, and it is this challenge that Krien is intellectually concerned with. For both genders, we lack utterly the language with which to articulate the grey area between sexual will and sexual consent. Culturally, legally and socially, we are mute, and confused. We don’t even know how to play the game that we’re in, and the rules are as good as a rigged roll of the dice.

It is all this and more that makes Night Games one of the most incredible works of investigative non-fiction that I have ever read. Krien is nuanced and fiercely intelligent, and every paragraph is addictive, leaving you thirsting for more as if in a thriller. This is something that will switch your understanding of football into awesome technicolour, as well as strike it through with the deepest unease.

END_OF_DOCUMENT_TOKEN_TO_BE_REPLACED

Ten years in the research and writing, inimitably bold, entertaining and irreverent in style, Clare Wright's The Forgotten Rebels of Eureka is a fitting tribute to the unbiddable women of Ballarat-women who made Eureka a story for...

In the tradition of Helen Garner's The First Stone comes another closely observed, controversial book about sex, consent and power. At the centre of it is Anna Krien's account of the rape trial of a footballer. Both a...

Based on a true story, Burial Rites is a deeply moving novel about freedom and the ways we will risk everything for love. In beautiful, cut-glass prose, Hannah Kent portrays Iceland's formidable landscape, and...