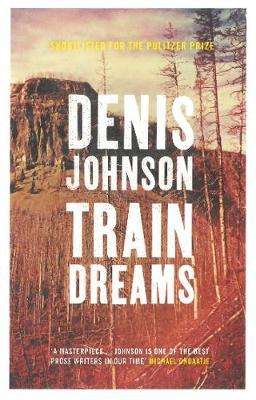 Robert Grainier is a day labourer in the American West at the start of the twentieth century  an ordinary man in extraordinary times. Buffeted by the loss of his family, Grainier struggles to make sense of this strange new world. As his story unfolds, we witness both his shocking personal defeats and the radical changes that transform America in his lifetime.
Suffused with the history and landscapes of the American West - its otherworldly flora and fauna, its rugged loggers and bridge-builders - Train Dreams captures the disappearance of a distinctly American way of life.

The history of this book is just a little bit amazing. Originally published in The Paris Review in 2002 and also included in the renowned O. Henry Prize Stories collection in 2003, it earned a small but dedicated following. And then, in 2011, Train Dreams was published as its own book in America and named a finalist for the Pulitzer Prize for Fiction.

Now, it finally has an Australian release.

In Train Dreams we discover the story of a man working as a laborer in the early twentieth century, Robert Grainier, who loses his family to a ‘feasting fire’. It is a vivid portrait of the ‘American west’. I first read Denis Johnson a few months back when a friend gave me a copy of his cultishly popular short-story collection, Jesus’ Son. I was hooked.

Johnson’s fusion of the visionary and the miraculous with hard-edged realism is simply riveting. He gives us characters to believe in wholeheartedly and places them in landscapes that are familiar yet strange, terrifying yet somehow comforting, all infused with unexpected, stunningly beautiful bursts of lyricism. After his wife and daughter are killed by the fire, Grainier returns to his ruined home to find the woodstove ‘lying on its side with its legs curled up under it like a beetle’s’. This black humour of Johnson’s crops up frequently, often in dialogue.

One of the things I love most about Johnson’s work is his ability to convey indefinable emotions. For example, when describing a young man falling in love for the first time and kissing his soon-to-be-wife, Johnson writes, ‘He felt glorious and full of more blood than he was supposed to have in him.’

Given lines like these, it’s easy to see how such a small book has made so much noise.