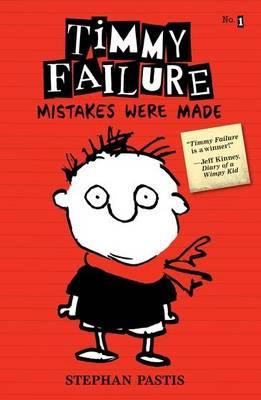 Take eleven-year-old Timmy Failure - the clueless, comically self-confident CEO of the best detective agency in town, perhaps even the nation. Add his impressively lazy business partner, a very large polar bear named Total. Throw in the Failuremobile - Timmy’s mom’s Segway - and what you have is Total Failure, Inc., a global enterprise destined to make Timmy so rich his mother won’t have to stress out about the bills anymore.
Of course, Timmy’s plan does not include the four-foot-tall female whose name shall not be uttered. And it doesn’t include Rollo Tookus, who is so obsessed with getting into Stanfurd that he can’t carry out a no-brain spy mission.
From the offbeat creator of Pearls Before Swine comes an endearingly bumbling hero in a caper whose peerless hilarity is accompanied by a whodunit twist. With perfectly paced visual humor, Stephan Pastis gets you snorting with laughter, then slyly carries the joke a beat further - or sweetens it with an unexpected poignant moment - making this a comics-inspired story (the first in a new series) that truly stands apart from the pack.
$17.95Add to basket ›

END_OF_DOCUMENT_TOKEN_TO_BE_REPLACED

Timmy Failure: The Book You’re Not Supposed to Have

Timmy Failure: The Book You’re Not Supposed to Have

Timmy Failure: Sanitized for Your Protection

Timmy Failure: Sanitized for Your Protection

END_OF_DOCUMENT_TOKEN_TO_BE_REPLACED

When 13-year-old Matt is discovered impressing the livestock in an Aussie country town with his remarkable soccer skills, he's offered the chance of a lifetime - a try-out at one of Europe's biggest and most glamorous soccer...

At the end of World War II, Jack Baker, a landlocked Kansas boy, is suddenly uprooted after his mother's death and placed in a boy's boarding school in Maine. There, Jack encounters Early Auden, the strangest of boys, who reads...

WINNER OF THE READINGS CHILDREN'S BOOK PRIZE 2014 Peat is on the run - forced to flee for her life when she's blamed for bringing bad luck to her village. She heads for the endless marshes,...

The Boy on the Wooden Box: How the Impossible Became Possible … on Schindler’s List

A remarkable memoir of strength and bravery from Leon Leyson, one of the youngest children to survive the Holocaust on Oskar Schindler's list.

SHORTLISTED FOR THE READINGS CHILDREN'S BOOK PRIZE 2014  When Inge Maria arrives on the tiny island of Bornholm in Denmark to live with her grandmother, she's not sure what to expect. Her...