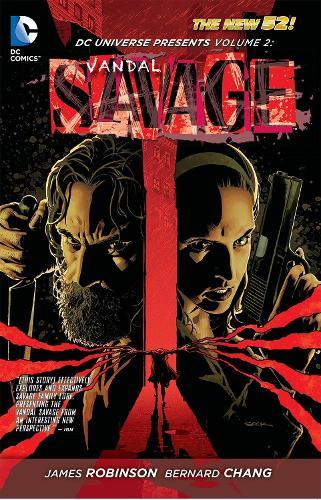 Vandal Savage has walked the Earth since the early days of man and has been a criminal just as long. Point to a historic crime or horror and most likely, the immortal Savage was there. Savage’s daughter, Kass Sage, chose a different path and is now know as the FBI’s greatest criminal profiler. When a serial killer appears of Kass' radar, she must seeek her imprisoned father’s help to put an end to the murder spree. Kass' life is full of tough choices, but when forced to make the ultimate choice between two killers - and her father may be the worse of them! Also included in this collection, the very first solo adventure of Kid Flash as well as five other adventures featuring the Blackhawks' Mother Machine, Hawk and Dove, Mister Terrific and O.M.A.C. Collects DC UNIVERSE PRESENTS 9-12, 0 and story from TEEN TITANS #11-12.