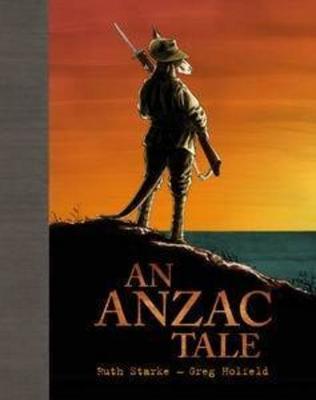 When Australia pledges its support to Great Britain at the outbreak of World War I, mates Roy Martin and Wally Cardwell are among the first to enlist.
But what the friends first thought would be an adventure soon turns to disaster The day after the landing at Anzac Cove on 25 April 1915, more than 2000 of their fellow Anzacs are dead. As the campaign drags on, life for Wally and Roy and their new friend, Tom, becomes a battle of endurance against a plucky enemy, a hostile landscape, flies, fleas, cold and disease. The story of the Anzac campaign, including the battle of Lone Pine, is interspersed with scenes of Australians at home to show the shift from popular support of the Empire at the start of the war to profound disillusionment as the casualties begin to mount.
In this graphic novel, Ruth Starke and Greg Holfeld have combined to create an extraordinary and original work for upper primary students on the subject of Gallipoli and the Anzac campaign.
$29.99Add to basket ›

On the Day You Were Born

Kissed by the moon

Scarlett and the Scratchy Moon

END_OF_DOCUMENT_TOKEN_TO_BE_REPLACED

Shahana: Through My Eyes

The Year My Life Broke

To Brave the Seas

A Rose for the Anzac Boys

It is 1915. War is being fought on an horrific scale in the trenches in France, but it might as well be a world away from sixteen-year-old Midge MacPherson, who has been sent to England to learn to be a young lady. Ages 14+.

In this graphic novel, Ruth Starke and Greg Holfeld have combined to create an extraordinary and original work for upper primary students on the subject of Gallipoli and the Anzac campaign.

Rachel is in the kitchen, warm and safe. Her father is in the trenches, cold and afraid. When Rachel makes biscuits for her father, she adds the love, warmth and hope that he needs. This is a touching story of a family torn...

Stunningly illustrated in over 70 paintings, The Poppy is the true story of one of Australia's greatest victories, and of a promise kept for nearly a century.