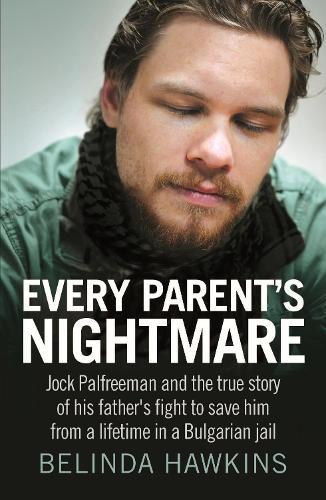 What would you do if your son was jailed for life in a hellhole of a Bulgarian prison for a crime you believe he didn’t commit? In 2009, young Australian traveller Jock Palfreeman was found guilty of the murder of Andrei Monov, the only son of two people well connected in the Sofia legal fraternity. He claims he went to the defence of gypsies being attacked by Monov and a bunch of soccer hooligans. The Bulgarians claim it was an act of cold-blooded murder. In a case of many twist and turns, where vital evidence was kept out of court and crucial witnesses never called, Belinda Hawkins brings to life the legal battle that haunted two shattered families on opposite sides of the globe. She also reminds us of the dangers we all confront when travelling to worlds very different to our own. But it is the attempts by Jock’s father, Simon Palfreeman, to obtain justice for his son and the terrifying emotional cost involved that are at the heart of Every Parent’s Nightmare. This is the harrowing story of what happens when worlds collide. It is also the powerful and heartbreaking story of one father’s fight to prove his son’s innocence.