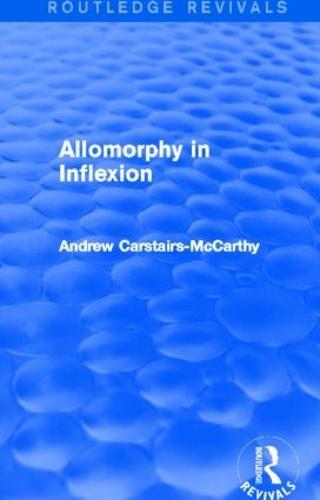 First published in 1987, this book broke new ground in research on inflectional morphology. Drawing on evidence from a wide variety of languages, it shows that this is not just a phenomenon left over from obsolete phonological processes but a subject deserving of respect in its own right. The book proposes constraints in three areas: (1) the organization of inflection class systems; (2) inflectional homonymy, or syncretism; (3) the direction of allomorphic conditioning. Carstairs-McCarthy’s notion of ‘paradigm economy’ revolutionized the study of inflection class systems but in its purest form, presented in this book, the hypothesis was too strong. In more recent works, the author has therefore argued that a version of it is an unexpected by-product of the brain’s aptitude for handling multiple vocabularies. The study of inflectional homonymy was pioneered by Roman Jakobson as evidence for the structuring of morphosyntactic categories or feature sets (case, number, tense, mood and so on) but his approach differed from that of this book, whose radical suggestions fertilized much subsequent work on ‘inflectional identity’. The direction of conditioning, first explored in this text, is debated actively within the Distributed Morphology framework popular within Chomskyan generative linguistics, despite disagreement with the Carstairs-McCarthy view that morphology is a domain of grammar entirely distinct from syntax. In The Evolution of Morphology (2010) the author takes these topics further, and also explains why stem alternation and affixation are importantly distinct as modes of inflectional expression. Inflectional allomorphy is an apparently pointless complication exhibited by many languages. However, this book suggests reasons why it is, nevertheless, easy for the brain to handle. The work thus has important implications beyond language, extending into human cognition.