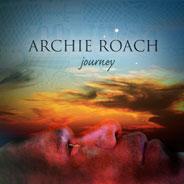 Archie Roach’s new album, Journey, relates to his own spiritual journey from pain to reconciliation through stories of Aboriginal Australians who suffered because of racism.

Songs of pain, loss, racism, redemption and hope. These ten songs are a marriage of Aboriginal and Western philosophy from the heart and mind of an extraordinary writer and singer. An elder statesman of Aboriginal music, Archie takes us on a journey of epic dimension but the music and the message are absolutely clear and uncomplicated.

Everyone has a favourite place, a part of the world where you feel you belong, where you are at peace. For me, that is the small coastal town on the western coast of Victoria called Port Fairy. Incredibly beautiful, wild and mostly quiet. I have been going there since I was a very small child. Only as an adult did I realise that we (as in the white people) were not the first people to live in this area and I wondered what happened to the original inhabitants because you certainly don’t see them in town now. Not far from there is a town called Framlingham. One of the original Aboriginal settlements, set up in the 1860s for the Indigenous population of Victoria to live in. It is the place where Archie Roach grew up, where he was taken from his family, as were many others as part of the Stolen Generation. It would appear Archie has been searching for his place ever since that time and is aiming to now move back to his motherland.

This record is intrinsically linked to a film called Liyarn Ngarn (which should see a release on DVD later this year), a project he, British actor Pete Postlethwaite and Aboriginal leader and elder Patrick Dodson worked on. There is a mournfulness to these songs; I think it is probably as close to the Negro-Spiritual music of the African-American people that we’re going to get in Australia. Songs of repression, repossession and hope for a better life. Archie Roach has a beautiful rich voice but the thing that strikes me most when I listen to this is the pain in his voice. The voice of a man who has suffered much but continues his search for justice. And for peace.

Dave Clarke is from Readings Carlton