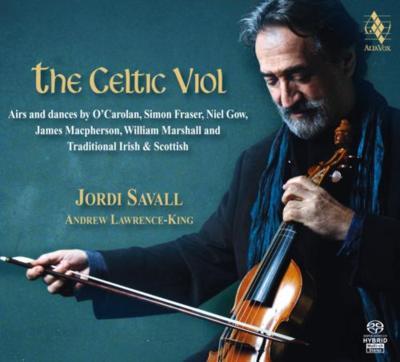 Thanks to in-depth researches on original manuscripts, Jordi Savall reveals the hidden beauties of Irish and Scottish music from the 17th to 19th centuries.The transcription from fiddle to treble baroque viol sounds so obvious that everyone realises the closeness of traditional and ancient repertoires immediately. Most of the pieces are irresistibly vivid and virtuoso, some are more melancholy, but all of them deserve the renaissance Jordi Savall offers them in his customary, masterly manner. And… for the first time in Alia Vox history, the cover art features a photo of Jordi Savall.

The first time Jordi Savall appears on his own on the cover art.

The first time AV linernotes have been translated into Irish and Scottish (!)

Jordi Savall out-does himself on this new release of traditional Irish and Scottish tunes. Expertly accompanied by early specialist Andrew Lawrence-King on Irish harp and psalterium, they jump in and out of the melody and harmonic accompaniment with ease. An intensely researched recording, Savall learnt some of the tunes from the original seventeenth-century manuscripts, after being inspired in Ireland at the Kilkenny festival.

Focusing on instrumental dance music for the fiddle, he plays various treble viols, swapping between them as needed for jigs or laments. Recorded in a Catalonian Monastery, it adds a soulful overtone to the slower tunes, while the swift dances are allowed the freedom to fly through the acoustic. Whether you like trad or classical, this will be enjoyed by all!

Isabel I Queen Of Castile