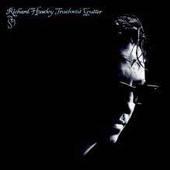 Richard Hawley’s sixth studio album, Truelove’s Gutter, is set to be released on Mute on September 18. Recorded in Hawley’s hometown of Sheffield at Yellow Arch studios, Truelove’s Gutter is a testament to his intoxicating song writing talents with eight new classic compositions.

Arrangements on Truelove’s Gutter occasionally feature some truly uncommon instrumentation, such as the megabass waterphone and crystal baschet. “I use a load of odd sounds on this album that are not heard on many other records,” says Richard. “The sounds in my head on a lot of the tracks - I didn’t even know what they were called!”

Eccentric instruments notwithstanding, the lush but minimal production provides a haunting backdrop to Hawley’s unique voice and allows him plenty of space for some outstandingly beautiful guitar solos. “I wanted it to be a listening experience from start to finish, where you couldn’t just pause it and go off and watch Coronation Street or whatever,” explains Hawley. “Sonically, it flows. It’s not jumping all over the place. It just has a mood that goes through the whole thing.”

Thematically his darkest work to date, Truelove’s Gutter explores the idea of people or things that are broken in some way, and the fractured and damaged times in which we live, to which Hawley’s lyrics give profound attestation.

END_OF_DOCUMENT_TOKEN_TO_BE_REPLACED

When The Devils Loose

Christmas In The Heart Std Ed