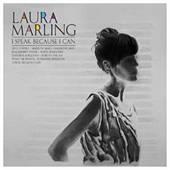 We first met Laura Marling with the Mercury-nominated debut ‘Alas, I Cannot Swim’, a mature-sounding folk album that was released when she was just barely 18 years old. It featured the lovely track and Triple J favourite, ‘Ghosts’. ‘I Speak Because I Can’ is Laura Marling’s coming of age album, its 10 songs imbued with a new richness, ripeness and sophistication.

Marling chose to work with producer Ethan Johns (Ray La Montagne, Kings of Leon, Emmylou Harris). But these songs are no pale Americana interpretation; rather they are tales deeply rooted in England. The creative partnership proved fruitful - Laura Marling will be releasing a second album of new material later in the year. Laura recently completed a sold-out East Coast tour that included stunning shows at the Spiegeltent as part of the Sydney Festival. Plans to return to Australia in support of both albums looks promising.

This is a darker record than 2008’s debut Alas, I Cannot Swim, taking further influence from traditional folk, though her modern charm remains.