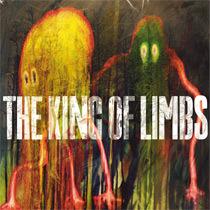 The eighth record from one of the world’s most famous bands.

A new Radiohead album is an event – and hot on the heels of the digital release, their latest sonic adventure The King of Limbs hits stores on March 25.

Anyone expecting another Bends or OK Computer should really have given up by now, at the risk of massive disappointment and point-missing, as The King of Limbs certainly ain’t it. What it is is the sound of a band on the move and a thing of textured beauty. As in much of their recent work, it’s a record that creeps up on you and the sound is loopheavy, but when it’s Radiohead controlling the loopiness, well … loop away, I say. As only Radiohead can do, they’ve once again produced a record uniquely theirs – and now yours.

Uses philosophy to show that Radiohead is the only band that matters. This book explains how Radiohead's music connects directly to the philosophical phenomenology of thinkers like Maurice Merleau-Ponty and Martin Heidegger, the...

The King Of Limbs