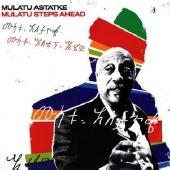 This is the first new solo album by MULATU ASTATKE himself since the 1980s!! A rich new album of Ethio sounds, perfect for all fans of world music, jazz and the outstanding selling Ethiopiques series. Following his acclaimed collaboration on STRUT with THE HELIOCENTRICS, the Father of Ethio jazz now presents his brand new studio album, “Mulatu Steps Ahead”. The album explores new directions in fusions of Western jazz with Ethiopian modes, moving forward the pioneering sound Mulatu developed during the “60s and "70s (as showcased on the recent Strut compilation "New York * Addis * London”). Tracks were recorded with members of EITHER/ORCHESTRA in Boston, with contributions by traditional Ethiopian musicians in Addis, members of The Heliocentrics and some of the UK"s leading jazz and African players during the final sessions in London in November 2009. The A-list line-up of musicians include BYRON WALLEN (UK), JACK YGLESIAS, JAMES ARBEN and DANNY KEANE from The Heliocentrics, members of Either/Orchestra in Boston and leading players from Addis Ababa.