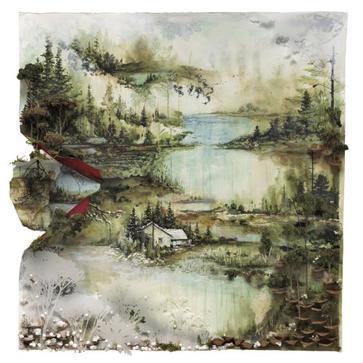 Bon Iver, the musical project of Justin Vernon that emerged to international acclaim in 2008 with ‘For Emma, Forever Ago,’ release the new self titled album on Jagjaguwar. Featuring 10 new songs penned by Vernon, the album' expands the group’s sonic palette beyond the rustic acoustics of the debut into a lush landscape of silky electric guitars, beautifully intricate keys, and subtle horn and string sections while keeping the ghost choirs and densely layered vocals intact that Bon Iver has become so known for. Painstakingly crafted over three years, the album was recorded and mixed at April Base Studios, a former veterinarian’s clinic in Fall Creek, WI, converted into a recording studio by Vernon and his brother. Bon Iver regulars Sean Carey, Mike Noyce and Matt McCaughan contributed vocals, drums and production; Rob Moose (Antony and the Johnsons, The National) helped with arranging and strings; and Jim Schoenecker and Tom Wincek (who have previously collaborated with Vernon under the Volcano Choir moniker) provided processing. The album also features the pedal steel of Greg Leisz (Lucinda Williams, Bill Frisell) and a horn section including Colin Stetson (Tom Waits, Arcade Fire), Mike Lewis (Andrew Bird, Happy Apple), and C.J. Camerieri (Rufus Wainwright, Sufjan Stevens).

Bon Iver’s long-awaited second album is finally upon us. The self-titled result is a more complex recording and band-orientated album than the debut For Emma Forever Ago. Each of the ten tracks holds an inspiration to the band from places around the world. The beautiful opening track ‘Perth’ is named after the place where the album started. The album is a progression from Vernon’s earlier ‘locked up in a cabin’ work to a vast open landscape of sounds: silky electric guitars, intricate keys, subtle horn, string sections and ghostly choirs. Vernon’s vocals remain as haunting as ever, mixing between his filtered vocoder and warm falsetto. A must have for old and new fans alike!

Nathan Fitzpatrick is a friend of Readings.