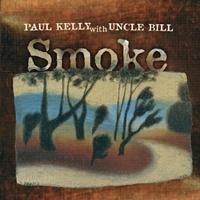 Smoke is a 1999 album by Paul Kelly and Melbourne bluegrass band, Uncle Bill, which was composed of Gerry Hale on guitar, dobro, mandolin, fiddle and vocals, Adam Gare on fiddle, mandolin and vocals, Peter Somerville on banjo and vocals and Stuart Speed on double bass.

The album featured a mix of old and new Kelly songs treated in classic bluegrass fashion. The album peaked at #36 on the ARIA chart and features cover-art by Reg Mombassa.

A rich batch of story songs - “Our Sunshine” for example draws upon the story of Ned Kelly’s life, in particular the 1991 book by Robert Drewe, Our Sunshine and Ned Kelly: A Short History by Ian Jones.