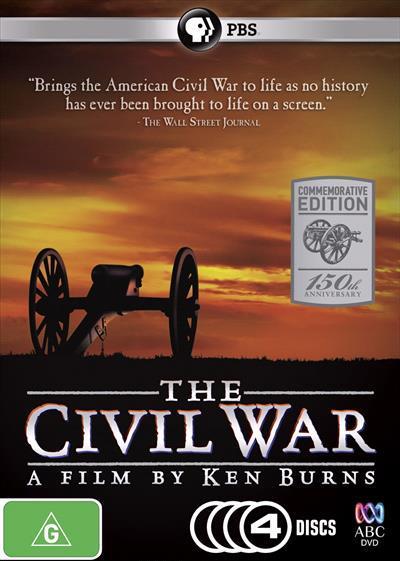 The defining event of a nations history, the Civil War was fought in over 10,000 places, between more than 3 million Americans, of whom 600,000 would never return home. From 1861-65, American homes became headquarters, churches sheltered the wounded and dying, and huge armies swept across the countryside, foraging from farms and burning towns. Countrymen slaughtered one another wholesale, in their own cornfields and orchards, along familiar roads and rivers. Epic battles were fought, heroes abounded, their names now etched in collective legend: Robert E. Lee, Stonewall Jackson, Ulysses S. Grant, Abraham Lincoln. What began as a bitter dispute between the States and the Union ended as a struggle over the meaning of freedom in America. Ken Burns' award-winning* documentary brings to life America’s most destructive and defining conflict. The Civil War is a saga of celebrated generals and ordinary soldiers, a heroic and transcendent president, and a nation that divided itself in two, in order to become one. *Winner of 2 Emmy Awards (1991), Outstanding Informational Series and Outstanding Individual Achievement Informational Programming Episodes:- - The Cause - A Very Bloody Affair - Forever Free - Simply Murder - The Universe Of Battle - Valley Of The Shadow Of Death - Most Hallowed Ground - War Is All Hell - The Better Angels Of Our Nature